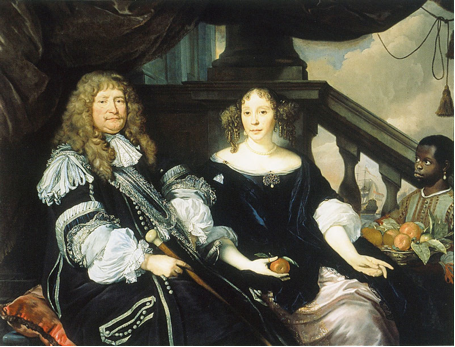 After the painting Portrait of Jan Van Amstel and Anna Boxhoorn,
by Abraham van den Tempel (1622-1672)

He’s nobody, the painting tells us:
a boy, alone, no name, male, servant.
Barely lit, in the shadow, someone destined
to a knot of darkness, to a no, to be at the sidelines.
At the margin, where his image is dimmed,
circling around other lives, invisible,
he hides (silent, without external courage)
and feels the weight of being dispensable.
To untie the bonds of possession, impossible.
Well imprisoned, he sees the flow that passes,
near, yet far, oblivious to him,
as if they were the blood of another race.
And he, the page, at the margin, watches everything.
But carries in himself the yes of one who resists.